Prior to the inception of the budget model, units received 19900 funds, which were a blend of State funds and Tuition and were not well-distinguished.  With the shift to creating different allocation approaches for the different pools of Tuition (e.g., undergraduate, graduate, etc.), the first step was to clarify what portion of a unit’s base 19900 budget was Tuition versus what was at the time called the “Provost Allocation” which was a blend of Tuition and State funds.  Units could identify what portion of their budget was due to Tuition as a result of workload versus decisions made on a non-formulaic basis by the Provost.  Under this approach, academic units received funding on both bases but administrative units could only receive funding through Provost Allocations.

The term “Provost Allocation” did obfuscate the fact that there were several types of allocations with this name, however, and in 2019, Budget and Institutional Analysis (BIA) reconceived of the Provost Allocation to identify the three components of this fund source: the historical funding that had been in the unit prior to the budget model, compensation adjustment allocations since the budget model, and budget decisions made primarily by the Provost through the budget process.  This new breakout provided detail on the basis by which funds had been received rather than simply whether funds were formula-based or not.  With this change, units could see how much they had received through compensation adjustments (e.g., employee salary programs) versus commitments made through the budget process.

Finally, in 2021, the adoption of the Common Operating Fund Initiative transformed these 19900 funds, as well as multiple other funds, into a single fund often referred to as “COFI.”  In the transition to COFI, the discussion of general funds or Provost Allocations on campus has shifted from a narrower focus on 19900 funds to all COFI funds, meaning this pool includes more funds than were considered earlier.  More information is available on the COFI website.

As was true of the Provost Allocation before, State support, both the amount predating the budget model as well as growth since then, increases in allocations to cover salary and benefit cost increases, and incremental leadership investment decisions (typically as a result of decisions made through the annual budget process) are all components of COFI funds.  Other fund sources which did not make up the Provost Allocation are also included in COFI, as depicted in the graphic below. 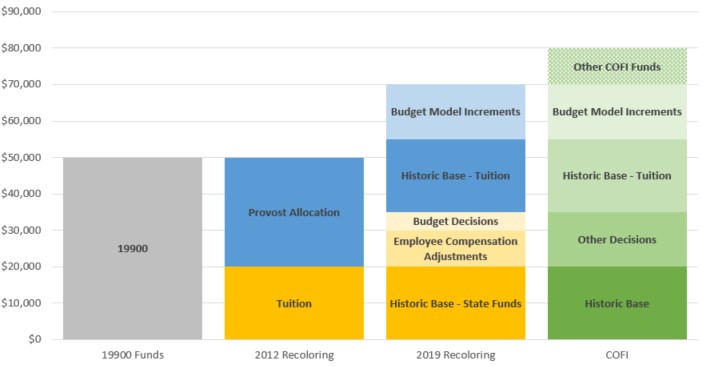 Historic Base - Tuition is the original estimate of Tuition funding in the 19900 pool before the budget model was implemented.  This is also a fungible source, suitable for use across all needs and priorities.

Other decisions include employee compensation adjustments, which are part of the Provost’s budget planning framework, as well as budget decisions made both in and outside of the budget process. Employee compensation adjustments include allocations to units for things such as merits and promotions, range adjustments, equities, and benefits. Decisions are made by campus leadership and include campuswide investments in infrastructure and centrally supported activities, needs identified in individual units, and/or necessary budget reductions. Leadership decisions are generally not formula-based, but are intended to address a common good, promote excellence on the campus, or address a specific need of an individual unit. Adjustments between units, such as organization changes, will also be reflected in this category. Though these are also COFI funds and can be used for any allowed use, the expectation is that these funds will be used for the specific activities they were allocated to support.