A Day in the Peet’s Coffee Roastery 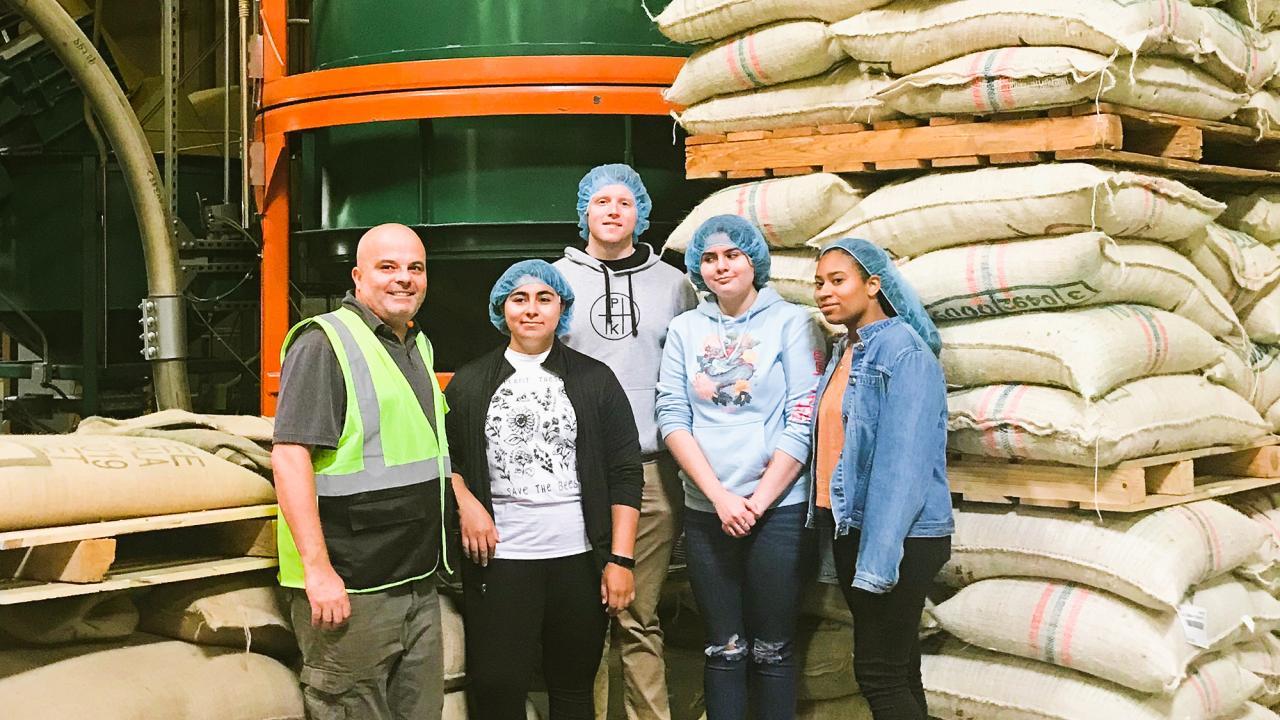 In the early hours of the morning, UC Davis students were preparing to go on a field trip, a rare treat made possible through a partnership between UC Davis and Peet’s Coffee. The destination: Peet’s Roastery in Alameda, CA.

Students who had previously taken the popular Design of Coffee class were offered the opportunity to tour the Roastery, an exciting experience for any coffee enthusiast. The class attracts a wide range of students, from English to Neurobiology, and every major in between. Select students were able to join the tours for a behind-the-scenes look at the coffee roasting process.

The tour was led by John Nicolini, a Peet’s Coffee roaster since 1990. Despite roasting large quantities of coffee every day, the floor was orderly and friendly, almost the same atmosphere you would expect at a Peet’s coffeebar. The tour included several stops to take a closer look at the roasting process. Students even got a chance to see how an experienced roaster carefully hand roasts a batch of beans using only sensory skills (sound, sight, and smell) and not machines. With the volume of the Roastery booming in the background, the roaster inches closer to the batch listening for popping noises and waiting until they hear just the right amount, signaling that the coffee is ready.

As students continued walking through the roastery, Nicolini explained Peet’s roast-to-order process, which includes shipping coffee as soon as it is roasted and packaged to ensure freshness. Rather than storing roasted coffee for great lengths of time, roasting begins early in the morning for same day shipping.

Students already familiar with the coffee roasting were amazed to see the process at a much larger scale.

“The coffee class helped me understand the tour better because I had done this process in the classroom lab,” said Andy Garcia, a student majoring in Community and Regional Development.

After touring the roasting floor, students were guided upstairs to a conference room with a view of San Francisco across the Bay. The next part of our tour experience was one not to miss — coffee tasting.

“The coffee tasting was my favorite part,” said Gurmun Singh, a student majoring in Microbiology and Molecular Genetics. “We tasted coffee that had just been roasted in this large Roastery.”

Students enjoyed sampling two different types of coffee that highlighted not only their distinct flavors, but also showcased the close-knit relationships formed between Peet’s Coffee and the farmers. Students were pleasantly surprised to learn that Peet’s executives had long-established personal relationships with the coffee farmers, which further solidified a strong fan base among the students. Since its founding in 1966, Peet’s Coffee regularly gives back to these communities so they can build schools and fund other community-related projects.

At the end of the tour, Peet’s provided students with lunch and goodie bags containing small gadgets and the coffee they had sampled earlier in the day. Each student expressed their gratitude for Peet’s hospitality and remarked how beneficial the field trip was to them.

This opportunity was provided by the UC Davis and Peet’s Coffee partnership and funded by purchases from the Peet’s locations on campus. Peet’s generously donates the coffee beans used in the Design of Coffee class.